As Bishops finally begin to allow for public Masses, many of the Catholic faithful find themselves in a difficult situation, for now some bishops are demanding that reception of the Holy Eucharist be in the hand only.  This is a tragedy and a crisis of faith.

It should come as no surprise, however.  Remember this? 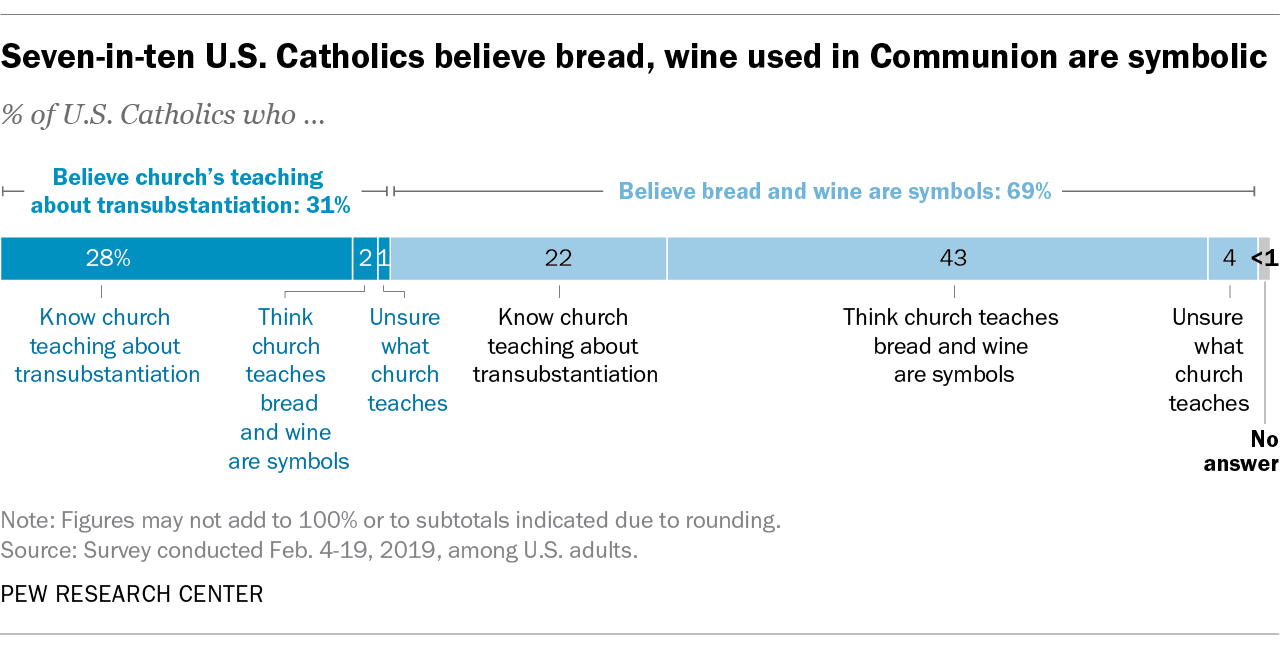 According to this Pew Research Poll from last year, 69% of Catholics don’t believe in the Real Presence of Jesus in the Eucharist.  Therefore, most bishops will have no problem forcing Catholics to abandon it’s age-old tradition of receiving our Lord on the tongue all in the name of Sanitation.

But for the rest of us, those who have come to believe in the Church’s teaching and have come to understand her reasons for receiving on the tongue, this will be a heart-rending moment.  What to do?

And if Fr. Z isn’t enough for you, read Cardinal Sarah’s latest statement HERE.  As many of you know, Sarah is the Prefect of the Congregation for Divine Worship and the Discipline of the Sacraments.  Let me put a few of his pointed remarks below:

“Nobody can prevent a priest from confessing and giving communion, nobody has the right to stop him. The sacrament must be respected. So even if it is not possible to attend Masses, the faithful can ask to be confessed and to receive Communion.”

“In Mass the priest has to look at God, instead he is getting used to looking at the camera, as if it were a show. We cannot go on like this.”

“There is already a rule in the Church and this must be respected: the faithful are free to receive Communion in the mouth or hand.”

“…the heart of the problem is the crisis of faith in the priesthood.”

In short, should you find yourself in this difficult situation wherein your bishops or priests are not allowing you to receive on the tongue, remember to be calm.  Likely these bishops and priests were not formed well in seminary after all, and heavy-handed bishops can make priests’ lives miserable for not obeying their worldly whims and fancies.

In any case, after asking the Holy Spirit for guidance, consider pointing your priest or bishop to Cardinal Sarah’s latest statement.  If he is still obstinate and refuses to give you Holy Communion on the tongue, remain steadfast and pray in your pew.  Don’t capitulate.  You will be vindicated at a later time, maybe in the next world.

The other day Bishop Kagan celebrated Mass for our local homeschool group to signal the beginning of another academic year.  We were very grateful to him for this.

Two of my sons served this Mass.  (Paul, of course, could not, as he was still in the hospital.)  Their particular roles during the Mass were to take care of the Bishop’s mitre and crosier.  Each son wore a special cope draped over his shoulders, which he used to cover his hands, so as to never touch either object.  For only the bishop may touch these holy items.

It was impressive to watch this interplay of giving and receiving.  One instinctively knew that something special was being given and received each time, by nature of that cope.  It was out of the ordinary and beautiful.  I wish I had a picture of it.

Kagan’s homily was beautiful too, even though it appeared to have nothing to do with the Mass readings.  Rather, it was all about the Real Presence in the Eucharist.  At the time I wondered if he was reflecting on the recent Pew Research Poll showing that 69% of Catholics don’t believe in the Real Presence.  In other words, the majority of Catholics believe the Eucharist to be only a symbol, which is nothing short of a tragedy.

My Husband is Spot On

I called my husband that night (he was still in the hospital with Paul) and told him about the Mass, about Kagan’s homily, about the boys serving, and finally about the special treatment of the mitre and the crosier.

My husband was quiet a moment and then said, “It is beautiful how carefully and respectfully the bishop’s mitre and crosier were handled.  You know, we used to treat the Eucharist this way too.  No one touched Him with his hands.  Rather, we knelt at an altar rail, and we received Him on our tongues.”

My husband sighed and went on, “I wonder if there would be more belief in the Real Presence if our actions showed what our hearts believed?”

“You mean,” I said, “if churches were to bring back altar rails and patens and if we all knelt once again?  You think it would help Catholics believe in Jesus’ Real Presence?”

This got me thinking.  Of course our actions and our postures matter.  There is a little phrase that one comes by, “Lex orandi, lex credendi.”  It means that how you pray will affect how you believe.  For our actions and postures aid our faith and belief.

In the Light of the Law

Crazy? Angry? You decide and I couldn't care less!